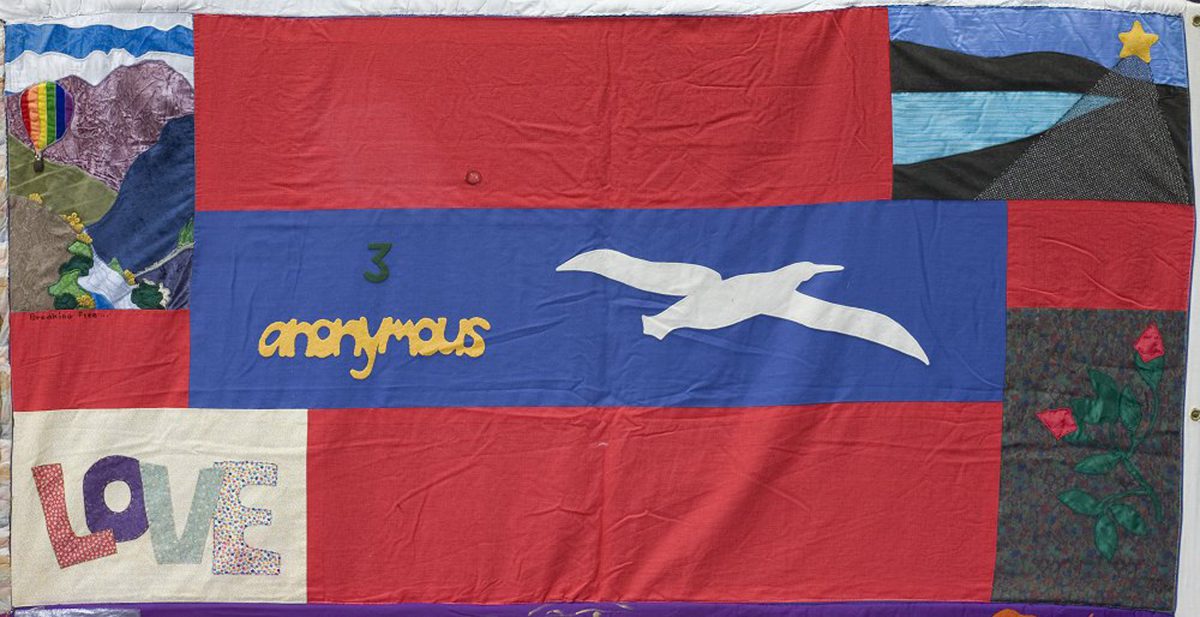 This panel, made in 1992 and crafted in vibrant, primary colours, for celebration is a tribute to the lives of three people who died of AIDS in the Otago region.

Its design is almost theatrical, planned for its effect rather than to reveal personal details or memorabilia.

It incorporates the blue and gold Otago colours in its central portion. The blue background with the green and gold legend ‘3 Anonymous’ makes a poignant statement alongside the white albatross, another specific Otago symbol. This giant, beautiful bird soaring upwards with outstretched wings, also represents ‘taking off’ and going to places unknown, and later, returning home to the colony for rest and recreation.

The person who pieced the quilt together desperately wanted to put the three names on the quilt panel but for various reasons was unable to do so. This was a source of ‘huge frustration’ and a ‘wistful, sad thing as well’. The panel maker said of the people represented, ‘they’re not anonymous but they had to remain so, and what does this say about the status and acceptance of HIV and AIDS in our community?” However, instead of names, these people have been given an identity based on regional consciousness and pride.

Contributions from three people featured on this panel. In the top right-hand corner, a peaceful scene of the silhouetted hills around the Otago harbour is depicted with starlight and moonlight shimmering down on them. This serene image contrasts with the patch in the bottom left-hand corner. Its creator says that the single word ‘LOVE’ made up of multi-coloured, tiny, floral fabrics on a flowery background is ’a bit of witticism’ and ‘homage to the flower people, San Francisco’ which relates back to where the quilt project started. It also recalls boys on Fire Island popping amyl nitrate, cross-dressing, and all the camp stuff of those nostalgic days – and nights.

The patch-worked illustration in the upper, left-hand corner seems to echo the albatross theme of flight. A Hot-air balloon with a canopy of gay, rainbow colours carries a basket which rises high into the clear blue atmosphere above the Taieri Gorge landscape, near Dunedin. The words ‘breaking free’ have been penned beneath.

In the bottom right-hand corner, a combination of embroidery and applique has been used to create a traditional symbol of love – two bright, red, satin roses with intertwined stems and leaves. The patterned background fabric repeats the green and red colour tones and compliments the plain, dominant, primary colours around it.

This panel is an expression of love and affection that is overlaid with some defiance. The person who initiated the idea for the quilt panel and who stitched the separate contributions together said, ‘I’m doing this because it’s the only thing I can do. I’m standing up for these people. Somebody’s going to acknowledge them. I don’t care what you say.”

In May 1997, The Quilt Project received a letter from Joka Neuman one of the people who made the panel, who wrote, in part:

I made a patch on the Otago/Dunedin block for two friends of mine who were HIV positive, and one, Murray Howson, has since died.

I promised him on one of his last days that I would add his full name to the patch if I “got my hands on it”. The rainbow and albatross is my patch with the rainbow-hued balloon.

Kia ora,
I was wondering if you had any records of who made these panels, and any way to contact them (other than the names mentioned on the webpage)?

ADMIN NOTE – Kia ora Jason, I’m afraid all we have at this stage is what is included in the webpage. If anyone sees this and has more information about this panel, we’d love to add it as a memory to this page for Jason and others to read. Please leave a memory below and thank you.