The History of The New Zealand AIDS Memorial Quilt

In New Zealand, the people living with HIV and AIDS collectively founded the New Zealand Quilt Project in December 1988 when the first memorial panel was created for Peter Cuthbert.

The first official unveiling of the New Zealand Quilt was held in Auckland on October 5, 1991 in the presence of the Governor General, Dame Catherine Tizard, and the convener of the Australian Quilt Project, Libby Woodhams, who brought with her quilts from Australia, including several commemorating New Zealanders. From the initial panel for Peter in 1988, The Quilt had grown to 32 panels for the October 5 1991 unveiling.

While the Quilt began as a memorial, it has become a valuable resource for promoting a compassionate and educational dialogue about AIDS. Its non threatening nature allows people from all walks of life to learn about the AIDS epidemic from its human side. Its artistic and creative approach enables accessibility to all.

As a conservation measure, the whole of the New Zealand AIDS Memorial Quilt has been photographed and made available for viewing on this web site.

Today, The Quilt is permanently housed at Te Papa Tongarewea, the Museum of New Zealand, in Wellington, where it is able to be stored safely for long-term preservation when not on display.

Special thanks to Gareth Watkins for taking the photos for this website which have also been used in various sizes on their respective pages.

There are three other Memorials in New Zealand that we are aware of. They are the Book of Remembrance at St. Matthew In The City, the Circle of Friends at Western Springs and the Memorial Tree on Constitution Hill.

The New Zealand Book of Remembrance was launched at the AIDS Candlelight Memorial and Beacons of Hope ceremony, Aotea Square, Auckland, May 1994.

The first book was dedicated at a ceremony held at St. Matthew in the City Anglican Church on December 3 1995.

As this church has been the focus of many Candlelight Ceremonies and funerals of those who have died from AIDS related causes in the city since 1989 the Church community invited the then Auckland HIV and AIDS Forum to house the book there permanently in 1995.

The display case in which the Book of Remembrance is kept was designed and built by artist and cabinet maker David White.

The record of names will stand alongside the AIDS Memorial Quilts as a simple remembrance of loved ones. It is hoped that in this way future generations will not forget the men, women and children of Aotearoa- New Zealand and beyond who have been lost to this disease.

The names of persons from any part of New Zealand and overseas may be added to the book simply by filling out a form available from: 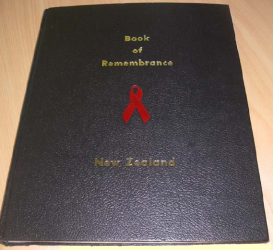 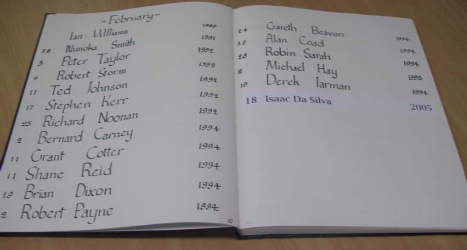 The Circle of Friends is located in Auckland’s Western Springs park, near the car park for Auckland Zoo.

Set in a corner of the park partly surrounded by trees, and by lawns, it is a peaceful place to rember those who are living with HIV/AIDS, those whom we have already lost and their partners/friends/families etc.

The people listed are some of those who have died from AIDS in New Zealand along with others who are living with HIV/AIDS, as well as partners, families and friends of those infected, regardless of whether they have the virus or not. 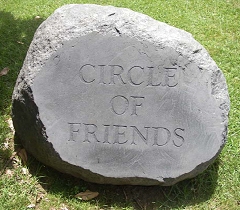 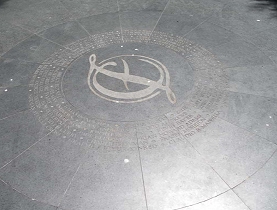 This Tree of Remembrance was planted on Auckland’s Constitution Hill by the Auckland Community AIDS Services in memory of those who have died of AIDS in May 1991. It is located near the top of the path leading down the hill, on the left as you go down. 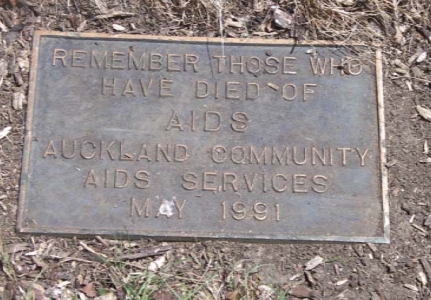 At a Candlelight March in the United States during the mid 1980s, cardboard placards were displayed in memory of people who had died of AIDS. This inspired one man, Cleve Jones, to consider the idea of a large quilt as a more permanent memorial. Friends and colleagues joined with him to help organise sewing bees and quilting workshops. The first panel was made in memory of a close friend of Cleve’s.

In June 1987, the NAMES Project was officially launched with its first public display of 40 Quilt panels. The response was so overwhelming that when the Quilt was displayed outside the White House in Washington, DC, some four months later, it had grown to 1,920 panels covering an area over two football fields in size.

The overwhelming response to this inaugural, and subsequent, displays established the Quilt in the popular mind as a national and global symbol of concern about HIV and AIDS. Half a million visitors saw the Quilt and this led to a national tour in 1988. Since that time, the US Quilt has grown to over 25,000 panels and the International AIDS Quilt has spread to at least 42 countries around the world.

World AIDS Day (1 December), 1988, saw the unveiling of the Quilt in Australia, with the first 35 panels in Sydney. The Australian Quilt remains the largest outside the USA.

These Projects can be found in the following countries (note that some of them are currently inactive):

The Names Project has in more recent years been used as a model for other Quilts remembering those who have died as a result of a wide variety of causes, including U.S. Armed Forces members killed in the Iraq war, the September 11, 2001 terrorist attacks in the U.S.A., and various medical conditions such as breast cancer, Huntington’s Disease, and congenital heart disease.