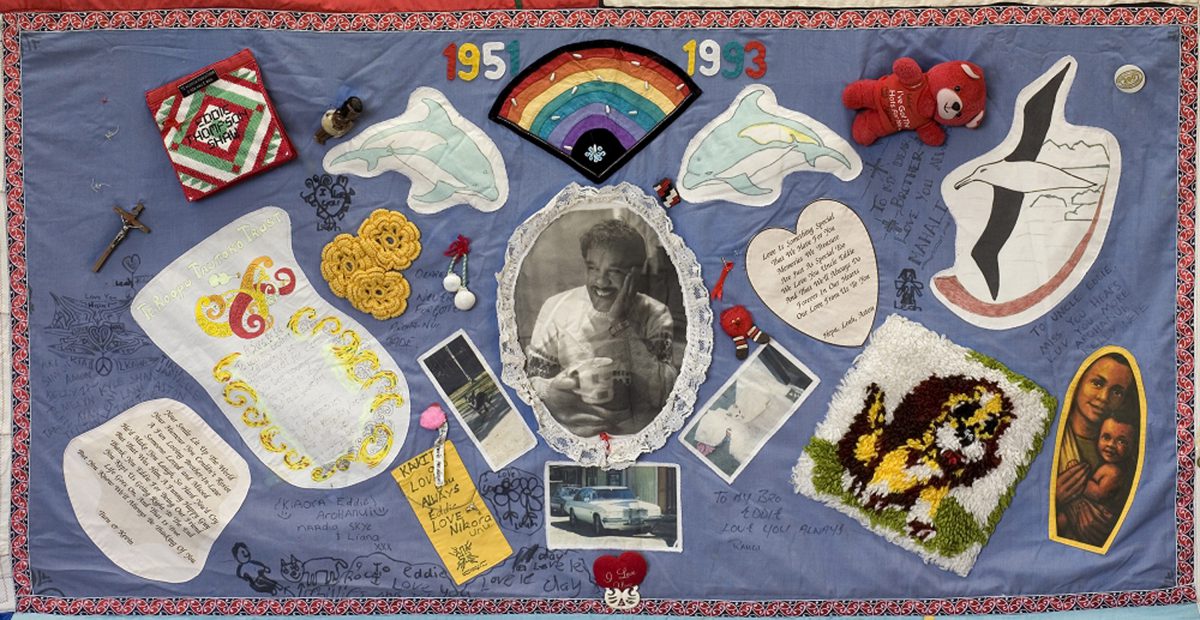 Ed
A Tribute wrote by his wife Jo.

“In 1986 Eddie tested HIV positive. At home in Dunedin on the 3rd of April 1993, in the arms of his wife Jo, and in the company of family and friends, Eddie lost his battle with AIDS.

A Postbank employee for 21 years, transferring from Wellington to Dunedin in 1978. Eddie’s biggest fear was rejection by employers and workmates. It was not rejection but the support he received from them, family and friends. Support for both Eddie and Jo. This made it possible for him to “get on with his life”.

Both became involved with Te Roopu Tautoko Trust i Otepoti (Maori Action on AIDS, Dunedin) in 1991. An acknowledgement in 1993 by the Group’s Chairman read, ‘Eddie was responsible for much of the growth of Te Roopu Tautoko Trust i Otepoti. He chose a strategy of educating people, firstly the Maori community and secondly the wider community; that was to go public with his illness. The effectiveness of this allowed him to reach the hearts of many people, breaking down the barriers of ignorance and prejudice, allowing people to see and view the issues of HIV and AIDS in an objective way.’

That same year (1991), they also became involved with a Dunedin based Maori Culture Club, Te Huinga Rangatahi O Nga Hau E Wha (The Gathering of the Young People of the Four Winds). Their involvement made it possible for Eddie to touch the hearts of parents, tutors and most of all, the children. These same children would have a vital role in returning him home to Hawkes Bay after his death. The warmth, kindness, love and understanding Eddie had etched in their hearts could be seen and felt in their tribute to him; a Guard of Honour while singing Te Hokinga Mai (The Return Home), as he was taken from Rakautatahi Marae. Their final tributes are the small but meaningful mementoes that have been sewn onto his panel.

“A panel made with all the care and love for a special person, Eddie, you will stay in our hearts and always be remembered.” I am personally grateful to two special people, Mrs Mary Parata and Mrs Barbara Namana for all the time, effort and aroha (love) they have put into making Eddie’s panel and to all those who contributed to it.

I believe God had a purpose for taking Eddie, now he is free from the pain and suffering. There is no anger, only treasured memories. Memories of our 17 years together (15 of those being married), memories which cannot be erased.

Eddie was a loving, caring, gentle, happy man with a beautiful nature and heart of gold. He was my strength, protector and advisor, understanding a woman and her feelings. Dedicating his time to family, friends, work, hobbies, Two Tone (our dog) and Rastus (our cat), to all that he loved. Capturing the hearts of many. I will always love him. He is my Guardian Angel.

Special thanks to all for their support and most of all friendship which was given to Eddie and me before, during and after his death. I feel deeply humbled and privileged to have such friends who helped me in so many ways. I will treasure the bond we have of all the many songs, poems and verses. I believe the following verse, written by one of his many friends, aptly describes Eddie:

“To have known Eddie was to have known a special man.
Eddie was a man of style
The class of a true gentleman
A heart full of aroha (love)
A smile to touch your soul
Laughter so rich and full of warmth
A touch soft and gentle yet firm
A true friend through and through
He loved and was loved by all….”
Shaikira

Eddie will be remembered by those who knew him, in their own special way. He was loved by all, NOT because he was a victim of AIDS, but because he was……..OUR ED.”