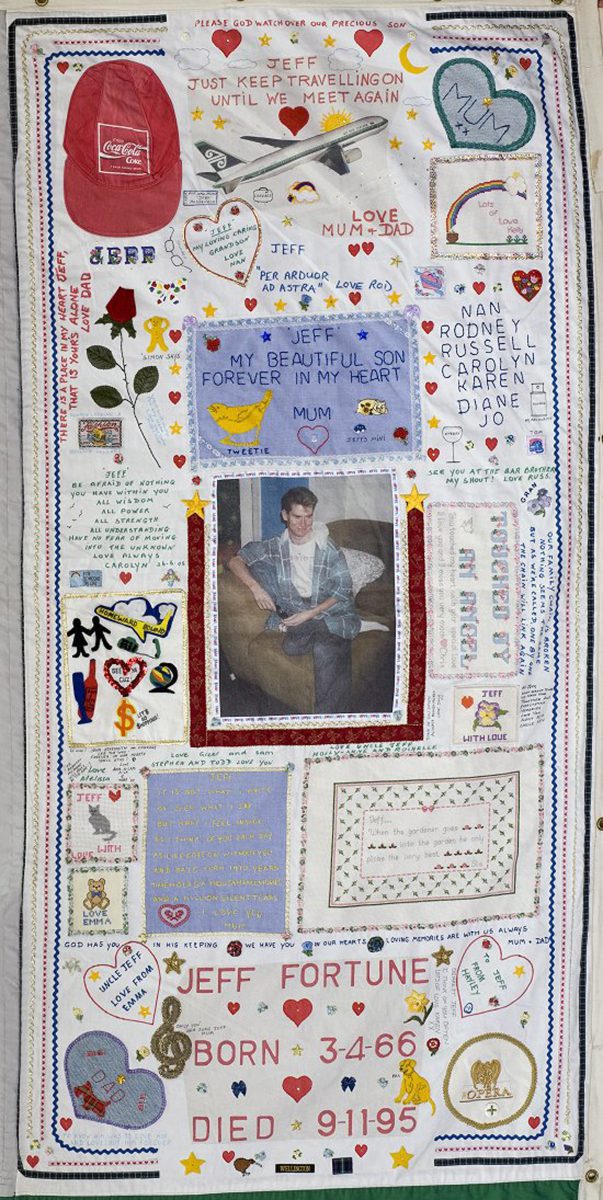 This panel is in loving memory of our dear son, Jeff. It has been put together mainly by myself but other members of the family have also helped by adding their pieces of work and written messages.

For me, as Jeff’s mum, it has been a privilege to have been part of this panel and I spent many hours thinking and wondering how to get started. We had no idea what other panels were like and only know it had to be a certain size.

However, with the help of my husband John, we came up with the plane, as Jeff’s first passion was flying, and then his photo and dates. We just went from there with no set plan until we felt it was complete.

When he was very ill, he did say to me that he would like to be part of The AIDS Quilt so I was determined to follow through with his wish, and nearly one year later (October 1996) we pass on to you our most treasured panel.

Jeff was the youngest of 4 children, one older sister and 2 brothers. He and I were very close and I loved him so very much.

What was special about Jeff? I would undoubtedly have to say “his expression of love”. He was a great lad in phoning up and always ending up by saying, “I love you, Mum”. He was a very loving person and this, to me, made him very special.

We, as a family, have learned a lot from having Jeff in our lives and we will be eternally grateful for having had the chance to know him and love him. He will live on in our hearts forever and we know he is close by.

We felt the tartan was appropriate as Jeff’s father is a Scotsman.

Thank you all for accepting our panel.