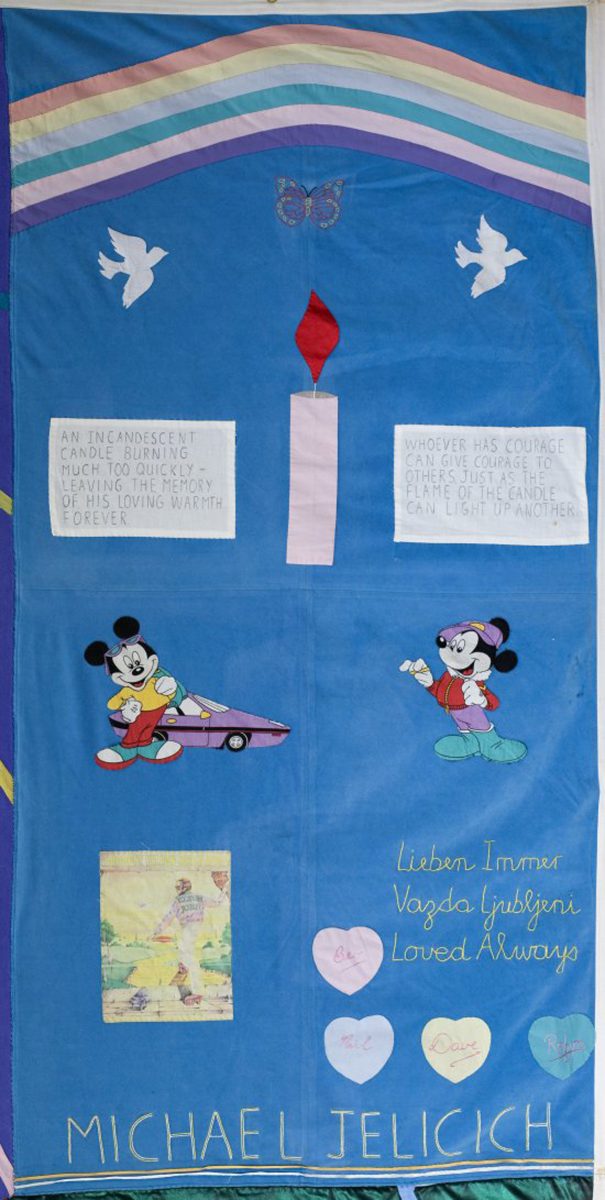 The rainbow across the top of Mike’s Quilt had deep significance for me. Mike had a favourite rainbow sweatshirt which he lost on his way home to New Zealand. The day of his funeral there was a beautiful rainbow. On his birthdays and anniversaries and significant days, I would see a rainbow. These gave me comfort in my deepest grieving period, as if he was watching over me. As a Navajo song says “There is a way out of every dark mist over a rainbow trail”.

Mike’s Quilt just had to mention Elton John. What better than a picture of “Yellow Brick Road” album cover! The songs on that album echoed throughout our house during Mike’s adolescent years (luckily, I liked it too). Little did I know then that I would play some of that music at Mike’s funeral. Or that, when I began to sort through some of Mike’s possessions, an Elton John song would play on the radio. This happened on several occasions.

The two white doves represent the prints I bought at a time when Mike had progressed to AIDS and was living overseas. One print was a dove leaving the shelter of the tree at sunrise and the other print was a dove returning at sunset. I clearly remember the tears and feelings these paintings evoked, as I knew the Mike’s sunset would inevitably come and that was so painful to contemplate.

The candle and the flame represented Mike’s willingness to shed light on living with AIDS. He was willing to speak out and agreed to be interviewed for a documentary on AIDS, but sadly died before he could be interviewed. Nevertheless, his story was told on television in June 1989. The candle also reminded me of Elton John’s classic song “Candle in the Wind”.

The two Mickey Mouses on the Quilt reflected Mike’s sense of fun and the joy he gave others. One Mickey Mouse has a pen in his hand, the other stands by a sports car. When young, Michael loved cartooning and drawing Mickey Mouse characters. He bought Mickey Mouse notebooks in which he wrote stories which were influenced by his love of Tolkien and C.S. Lewis stories. The Mickey Mouse and his car took me back to how proud Mike was of his first and only car – a Hillman Imp Fastback, which he called “The Dawn Treader”. The day after he sold it, it blew up.

I embroidered “LOVED ALWAYS” in English, Croatian, and German. The Croatian was in reference to Mike’s Dalmatian heritage on his Dad’s side, from which he inherited his brown eyes, olive skin and dark hair. The German phrase acknowledged his love of languages and many prizes he won in German at secondary school.

The names of his brothers, Neil and David, and his beloved sister, Robyn, are embroidered within the hearts, as is my name.

And finally, a butterfly nestles underneath the rainbow as a symbol of hope, beauty and colour in Mike’s new life.

*******************
Making Mike’s quilt was a tangible expression of feelings of love, pride and sadness. The rainbow and butterfly were meaningful symbols as they gave hope when we lost Mike. We recognised his love of family, languages, Elton John’s music, Mickey Mouse, by illustrations on the quilt.

Making this visual remembrance of Mike’s life was the least tribute to pay a wonderful person.

Andrew Doig wrote this about Michael:

The first thing I saw was a pair of woolly socks poking out of the end of a hospital bed way too short for this lanky man. The next thing was Michael, reaching from the bed for a cardboard bowl to throw up into. I felt awkward witnessing this without even having been introduced. At that point, Adam, his partner, came back into the room and we introduced ourselves. It was March 1989 and the place, the HIV ward at the Chelsea and Westminster hospital. I had come to meet my new buddying assignment, just a week after my last had ended, here in this hospital. Little time to grieve in those days: just on with the next. Despite his sickness, Michael gave me a welcoming smile and soon put me at ease.

The Kiwi accent, the woolly socks and the introduction to Adam, whose books I had read, made me realise I was in the presence of ‘Neil’, until then, a fictional character in a short story by Adam. ‘Neil’ was now Michael and Michael were sick but so upbeat and reassuring that I was sure he would be out of there in no time and back on his very large feet.

The next time we met, Michael was back at Adam’s flat in Islington. He told me about himself, about his time in London and about growing up in New Zealand. It was all so like ‘Neil’s story that I couldn’t distinguish what Michael had told me from what I had read in Adam’s short story. Anyway, there was no point to our chat, there never was a point, except to connect somehow so that, if need be, there was someone to talk to who wasn’t your partner or your parents, someone you could ask for company or help without embarrassment, because that was exactly what they were there for.

I saw Michael only a few times more, once on Highbury Fields with Adam. Then he sent a card from a trip away to Venice. Then there was his farewell party before he made a trip back home to Auckland. He made a video of the people there so that he could describe the people in his life here to his Mum at home in New Zealand. He stayed a weekend at my holiday flat in Brighton with a friend before he went. We spoke on the phone but I didn’t see him again.

He sent a card from San Francisco, regretting he hadn’t been able to exploit the fleshpots of New York because the KS in his mouth was so sore. He wrote from Auckland, quite upbeat, but saying he was on chemo and couldn’t enjoy what Auckland had to offer either. He hoped to get back to London soon. I wrote back directly.

I was in a homewares store in Tottenham Court Road and there were two of his friends I knew. I told them brightly about the letter I’d had from Michael. They looked at one another and then told me he was dead. I covered my shock and got out of the store as fast as I could and ran all the way home to Marble Arch to be alone. I hadn’t been expecting this.

Sometime later his mother wrote and told me the story of his fight and his decline. It was a generous letter. Michael had told me how proud he was of his Mum and the way she had involved herself in caring for people with AIDS. I wrote back and told her so. And that was the end of that. Except that I have never forgotten this tall, gentle, smiling kiwi who should still be with us today.

By chance I read an obituary for Bev, his Mum recently. She died in April 2012. It told of her continued contribution to the fight against AIDS long after Michael was gone. Now I remember them both.”

It’s been just over 25 years since my brother Michael passed away. It was so nice, that at this time I should come across Andrew’s lovely memories above. Thank you so much, Andrew, for taking the time to share your memories of Michael – it is much appreciated by myself, my brother David and my sister Robyn who shared a special bond with Michael. I know also that our late mum Bev would have been especially pleased that you still remembered Michael after all these years.