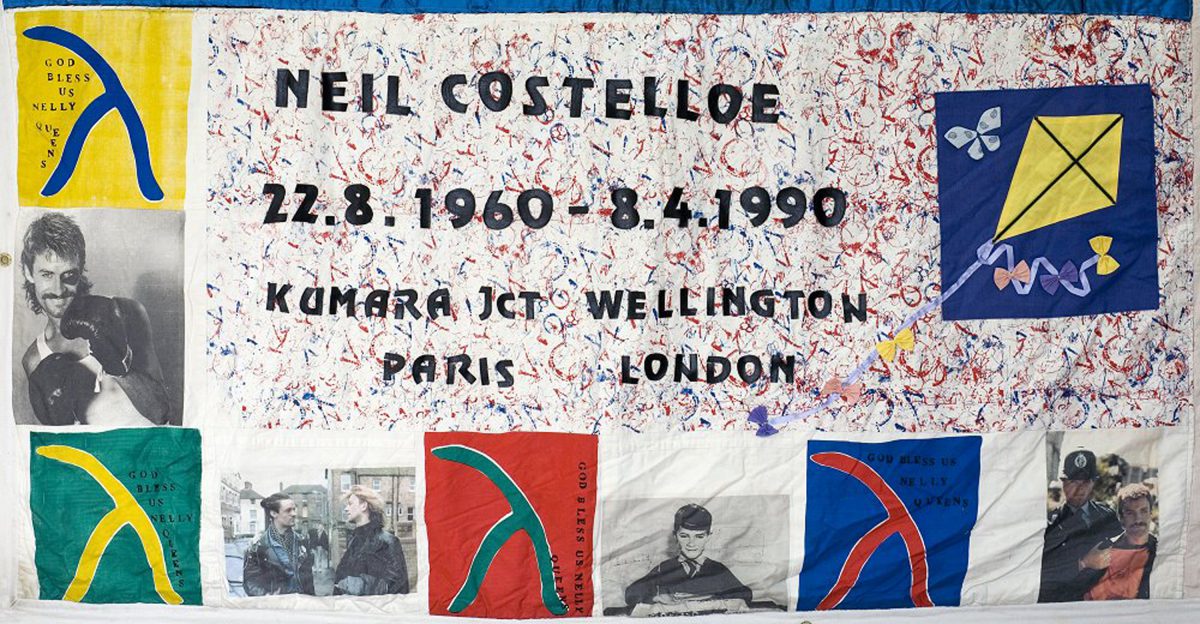 For some years there was no story to accompany this panel, however Kat, one of Neil’s lifelong friends, has written:

The quilt was made in 1991 by Kat Hall, Sally Hunter, Neil Anderson, Bayly Watson, Janet Dunn, Jane Costello (Neil’s sister) and other anonymous friends. The idea to make this quilt came from some of us who were unable to say our goodbyes to Neil when he died in London in 1990.

The litho-screened parts of the picture include:

The photographs were organised by Bayly and refer to:

An anonymous friend who used to fly kites with Neil made the kite.

Leather was chosen for the words, as it symbolised the leather jackets that he wore in London.

Alison added this memory for Neil:

Neil Costelloe was one of the most important activists during the Homosexual Law Reform Campaign, 1985-1986. The NZ lesbian and gay communities owe this heroic and courageous man a great deal of gratitude. I remember Neil and Shane Towns, also lost to AIDS and other gay activists at the wonderful Pipitea Street (Wellington) house. So many actions planned there, many by Neil Costelloe.

Maurice added this memory for Neil:

Before Neil left for London he was very active in the community. The flat in Pipitea Street, Wellington, that he shared with so many other young gay men served as a centre of gay activism at the time. During the Gay Law Reform campaign, a group wanted to stage the first gay ‘sweatshop’ performance ‘gay only drama’ in New Zealand. Neil created the poster referencing the work of a gay designer, Keith Harring in his finished design. Martin Sherman’s “Passing By” was staged at Circa Theatre in Sept 1985.
Neil’s poster for it is now part of the gay archive held in the NZ National library.
Added January 2016

Neil was a school friend from Viard College. I have a lovely photo of Neil from college days and I’d like to share it with his family, but I don’t know how to contact them. Do you have a contact email or phone number, please?

ADMIN NOTE – if anyone is in contact with Neil’s whanau, we’d love to connect Rosemary with them to share this photo. Please leave a memory below and we’ll be in touch.

Hey, Neil Costelloe is my uncle and I would love to show my mum the photo you have of him! please contact me back. My name is Regis Perez Costelloe.

ADMIN NOTE – we have forwarded Regis’ details to Rosemary so they can share this photo.