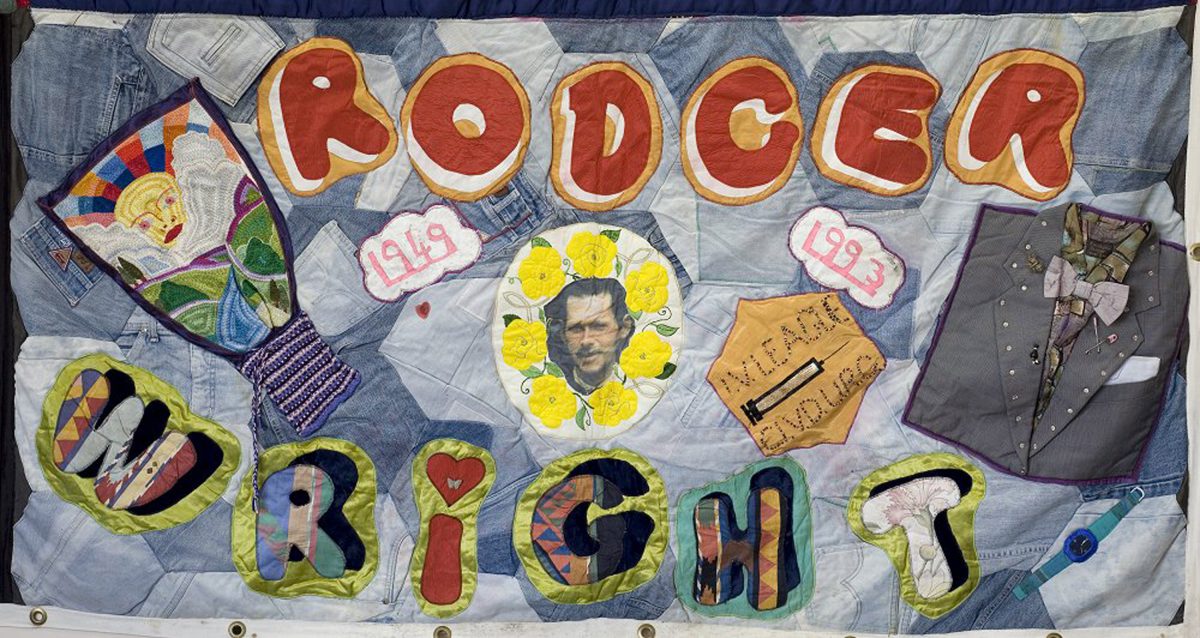 Rodger’s Quilt panel features his photo framed by yellow roses, a piece of embroidery done by Rodger, the front lapels of one of his jackets and IV League work. The Quilt background is a denim patchwork made by Rodger from his old jeans.

Most of us came to know Rodger because of HIV and AIDS. Rodger had a long association with this virus, and once it was confirmed that he, in fact, had the virus he committed himself to tell everybody all about it. He, in fact, said, “I’ll talk to anyone, any group, any organisation because the more it’s discussed the better, and the sooner we’ll have effective prevention programmes.”

So, imbued with his new found community spirit and his friendly disposition, and his outrageous coloured socks and matching bow-tie and colour co-ordinated watch, he embarked on what he called his ‘mission in death’ – to shake NZers out of their complacency, to shock them into recognition that AIDS is here not just in Sydney. He said that, for the first time in his life, he had direction and purpose – “something to fight for.”

He spent most days on some sort of educational work. He was keen to visit any secondary school happy for him to work on their health syllabus on AIDS education. And they were happy to invite him in. And so for many hundreds, possibly thousands, of Canterbury college kids, Rodger was the human face of AIDS.

They loved him because he pulled no punches, he spoke their language. He was honest and up-front, sometimes crude and just a little rude, but above all he showed a passionate concern for those kids he saw as being in danger of being infected.

Rodger’s decision to publicly own AIDS, to draw back the curtains on the most intimate and painful details of his battle with HIV, took enormous courage and conviction. At times it brought him something akin to celebrity status; with his endless speaking engagements, his appearances on radio talkback shows, and as the subject of what seemed to be regular newspaper and magazine articles.

At other times, he bemoaned the crippling isolation as he endured a succession of public, yet lonely illnesses. But he said, “the only thing I don’t need is sympathy…I’ve got over feeling sorry for myself.”

Rodger worked as an organiser and South Island Co-ordinator for the IV League, a voluntary group formed in 1985 in response to the growing AIDS epidemic among intravenous drug users around the world. (The centre in Christchurch is now known as The Rodger Wright Centre).

He was a foundation member of the National Council on AIDS in 1988. He had been appointed to represent the Injecting Drug Using community and remained on the Council until 1990.

Convinced that by stopping the spread of HIV amongst IVD (intravenous drug) Users an epidemic would be prevented among the general community, Rodger worked to convince our lawmakers that sharing needles happened because they were in short supply – not because of some sort of druggy psycho-social ritual.

He had considerable input into the Misuse of Drugs Act which came into effect on February 1, 1988 and which made it legal for participating pharmacists and others to sell special packs of needles and syringes to IVD Users and to exchange such packs for used needles. (Commonly called “The Needle Exchange Programme”). As well as containing information on where to obtain treatment for dependence, these packs had information on HIV, together with a condom, linking safe practices in sex and drug use.

Also during this time, the National Council wrote a major policy document for the government: The New Zealand Strategy on HIV/AIDS. Rodger’s contribution is said to have been useful and significant. Those involved are said to have admired Rodger’s ‘great patience and tolerance for those who had a lesser knowledge than he.” Alongside Gary McGrath, Rodger can be described as ‘an architect of New Zealand’s needle exchange programme.’

Rodger was a dedicated teacher who put the needs of others before his own.

Through Rodger we have learned that the virus can teach us to be more caring and supportive of each other.