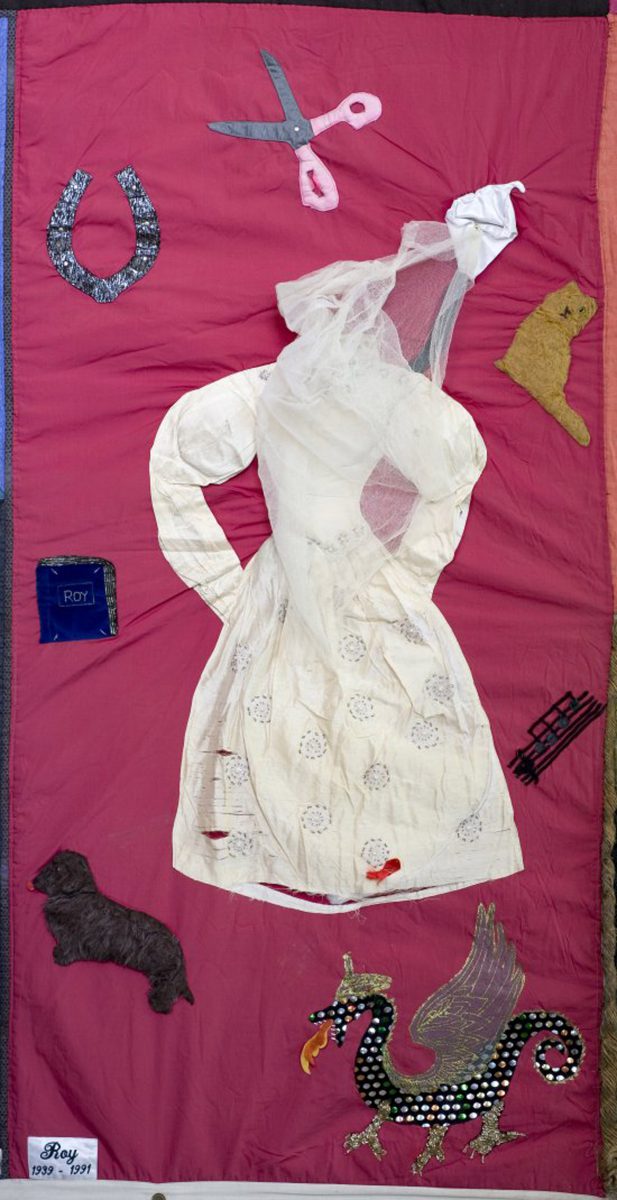 How does one assimilate a love of history, a flair for colour and an acquired skill as a bag-maker? Become a designer of gowns. Roy was a multi-faceted man with an ability to take his many, and widely varied interests and combine them on occasions to create the effect and atmosphere he required.

From an early age, he showed a sense of colour which later was used, most effectively, in the creation of gowns. On at least two separate occasions Roy, not part of any design company, had his entries in the Benson & Hedges Awards reach the finals. There was no production team to help him. He did the lot – from drawing the design, choosing the fabric, cutting it out, to sewing the gown together and adorning it with beads or sequins where appropriate.

His love of history and sense of balance gave him other opportunities in dress design also. Roy’s first bridal gown, designed and made completely by Roy, was for one of his sisters. Quite a number were made for friends and his last he made for his niece (coincidentally, the daughter of his sister whose gown had been his first).

If one walked into his house, stopped, looked around and listened, one could feel that they were in another period of time. In the background would be heard music from an opera, perhaps first staged over a hundred or more years ago. Around the walls, the articles adorning them ranged from antique to the contemporary prints of old masters.

Yet, to complete the contrast in music, as in other fields of Roy’s life, it is worth noting that he was an able dancer of rock’n’roll, combing a great sense of rhythm with the theatrics of jive.

His large collection of books provided a solitude from the hustle of the day. Herein lay an opportunity to let his mind follow paths from Royalist historical to the futuristic and the supernatural.

Roy relished the chance to entertain and thus show his culinary talents. Mood matched the meal with the chosen music in the background, complementing the style and type of food presented.

How far distant can that man be from the gardener tending the weeds and listening intently to the commentaries on the radio, especially of the harness racing.

To set a goal and concentrate all efforts to achieve it, is an aim both expected and saluted in today’s world; determination and sometimes outright doggedness, a trait to be respected. Roy certainly had these. Once he had chosen to follow a particular path, he seldom waved from it.

Born first of six children, Roy attended both primary and secondary school in the southern suburbs of Auckland where he showed a talent for and interest in both art and drama.

From his apprenticeship in bag-making came the abilities in sewing which allowed him the chance to live in such places as Wellington, Palmerston North, in Sydney, Australia, and his home-town of Auckland.

Such was the diverse collage that was Roy.

With love from his sisters,
Rewa, Tiri, Paula, Raewyn and Annette