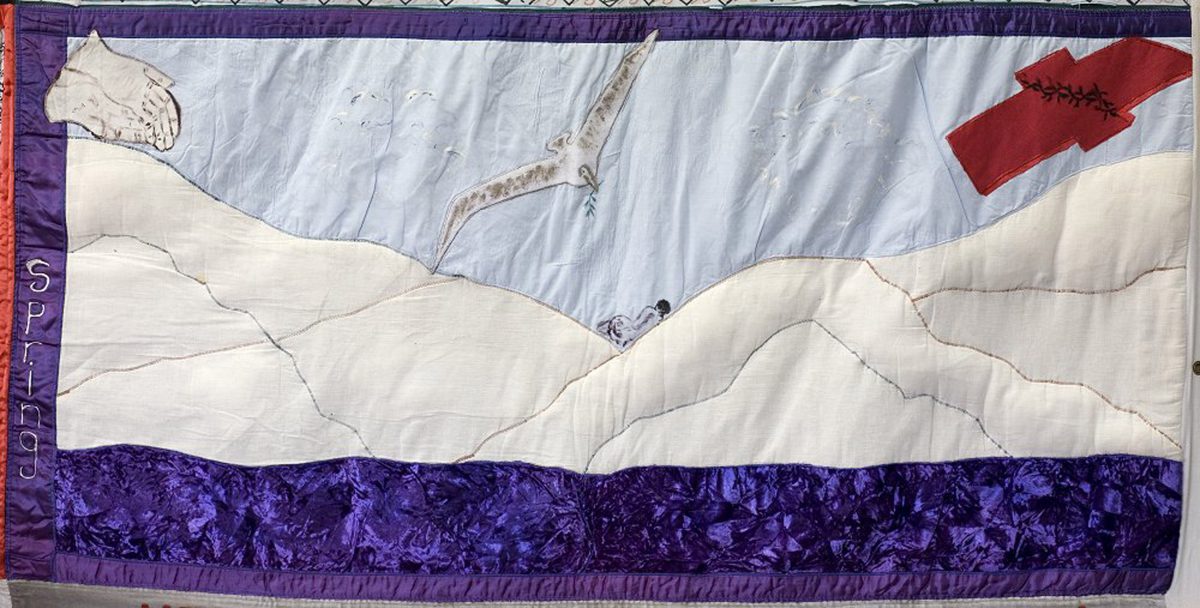 Taken from the book “Unfolding: The Story of the Australiana and New Zealand AIDS Quilt Projects“

My husband’s name was Spring. We were almost twenty when we got married. When I look at it now, I think we were too young. Consequently, we went through a lot of hard times. In 1989 we got a divorce. We had been living apart for about five or six years. Two and a half years ago, Spring died from an AIDS-related illness.

We told the children that he had AIDS and that he was dying; there was never any question that we were not going to tell them. Their reaction was, ‘Dad, we love you.’ They all jumped on his bed and we were all crying. We had about a month with him before we had to come back home to Whangarei, and in that month we talked more than we ever had.

One day in the hospital, Spring said to me, ‘Would you marry me again?’ I said, ‘Yes, give me a week to sew up a new dress.’ As it goes, he died on the second weekend in March, so we never got a chance to get married but I guess the important thing is that he asked me and, more importantly, we knew that we loved each other anyway. That memory is something that I will hold precious always. When life has a short span then you really get down to the nitty-gritty. I thank God that I had that opportunity to do that with him.

Spring loved the land and the sea. He was a very vibrant, very motivating person to be around. When he did something, he did it with his whole heart. He was a good husband and a good father. So we wanted to depict that on our quilt. We picked a royal blue, a calico material for the land and a lighter blue for the sky. We have put the sea on the quilt at the bottom. He loved going fishing and camping. Those are the sorts of things that the children really enjoyed doing with him.

We’ve done the land in an earthy-toned calico and zigzagged the hills in different colours depicting different shades of the earth. When he was back with his mother on the farm, he had big gardens going with corn and kumara and potato. Our children used to help him in the garden, weeding. The gardens around the house were always really tidy with flowers and lovely colour everywhere, the lawns always manicured. He loved the country more than the city, the quietness and the tranquillity of it.

The white designs on the sky represent the stars and I puff-painted clouds on. In one corner on the left-hand side, we put a pair of hands. To us, that represented God, and how when Spring had made his peace with God, we had a strength to go on because we knew that he would be going into the Father’s arms. The dove represents the Holy Spirit.

From the red cross, down to the little figure in the middle of the hills, which represents Spring at rest within the earth, and up to the dove, is a fine line of glitter, which represents the peace that he received through Jesus Christ. Inside on if the hills is a bell, so that every time that the quilt is lifted up and billowed when they have a showing, the little bell will tingle.

There are about eight or nine quilts from the Taitokerau region. We joined them at the Marae at Titoki. It was really nice to sit around with the other families, sewing things together by hand, putting last-minute touches on, singing away with each other, retelling stories. I found being able to talk to people, really knowing that they understood where I was coming from and where I’d been, was very healing for me.

I have a special feeling for our Taitokerau quilt. I know that it has aided a lot in education in this region. It’s really neat to know that our quilt will have that effect on other people. To be able to use it to educate people is a great thing.

When people found out, in his little community, that Spring was diagnosed HIV-positive, they ostracised him. He was a very important part of that community. He was responsible for instigating a lot of their work schemes, was very involved with the children’s rugby, the Marae. He was their chief fundraiser, their chief cook.

To have the community turn on him like that hurt him really badly. I’ve never known Spring to run away from a situation, but he ended up having to because he was feeling so sick. The ostracism on top of that was too much.

The hardest thing to deal with has been people’s ignorance. Shannon too was ostracised by his teachers and his peers when they found out what was wrong with his dad. He got to such a state where he was really explosive and had to leave school, and when I went for counselling from a pastor at the church, I was told not to tell anyone else in the congregation. I found that really hard to cope with because I really needed to talk to people.

However, I have dealt with that and I have been able to carry on. My life is rich and it’s full, it’s hard sometimes, but I have a strength now that I never had before. I am more able to plot my course. I know I am going to be a good nurse. I will know what people are going through.

I found a release, really, in doing the quilt. Before that, the children and I just dealt with it on our own. No one on the outside knew. Doing the quilt has helped us to, you could say, go public. It has helped us in another stage of accepting what has happened in our lives.

At the time of writing this, in the mid-1990’s, Bessie was studying to be a registered nurse in Whangarei where she lived with her three boys aged between 12 and 20 and a 6-year-old daughter with cerebral palsy. All the children helped Bessie in the making of Spring’s Panel.