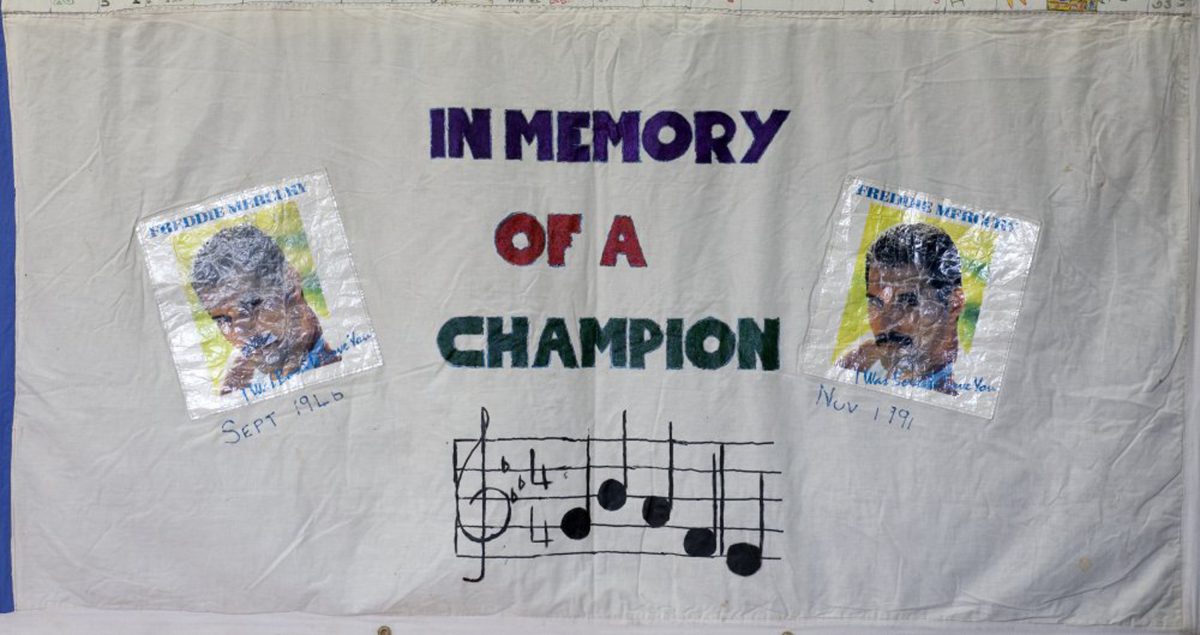 This Quilt was made to honour the man and his music.

Freddie’s Quilt was made just before Christmas 1991, only a couple of weeks after his death.

Warren Butler was a real fan of Freddie’s and came up with the idea of doing a fundraiser using Freddie as the ‘draw card’. This Quilt was made along with one divided into 144 squares (Sharing The Challenge – see Panel above this one on this block). Both were taken throughout Auckland and in exchange for a $5 or more donation, people could write into a square their reflections about Freddie and his music.

Warren raced about to 2nd hand shops and record shops looking for a record cover to put on the Quilt. In a state of exhaustion, he finally found one, and a really appropriate one it was too, “I Was Born to Love You”. That’s how Freddie felt about his adoring fans and how his fans felt about him.

Freddie was the lead singer of “Queen” and for 20 years remained popular. Songs such as “Bohemian Rhapsody” will, no doubt, live on forever.

We decided to keep the Quilt plain and simple. Bryce inscribed the music symbols and lettering. Megan filled in the colouring and helped to sew.

Freddie and his music will live on in our hearts for a very long time and those of us that remain will continue to see “The Show Must Go On” in the fight against AIDS. That Freddie told a stunned world he was HIV positive the day before he died shows this epidemic still has a stigma of fear.

This Quilt was made with love and lots of happy memories.