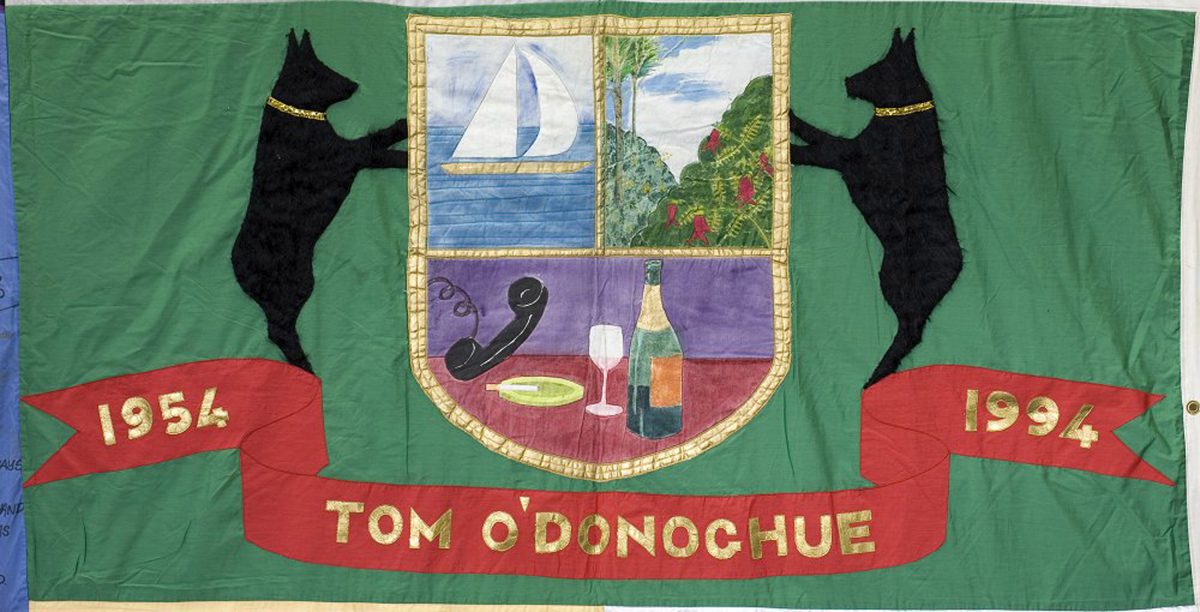 In March 2015, Kim Scholey sent us the following information about Tom’s Panel:

The Panel was made by Tom’s friends Mark Thompson and David L. Brown.

The two Schipperke dogs represent Wallis and Jojo who loyally accompanied Tom as his coffin as was finally carried down the 110 steep steps and winding path of his house on 1st October 1994. They are fabricated from a black mohair scarf of Tom’s.

The yacht is a reference to Tom’s love of sailing, which began during his childhood in Paihia and continued with his trans-Atlantic crewing adventures.

The cigarette, telephone and glass of wine are a reference to Tom’s habit of long chatty conversations in his Wadestown (Wellington) kitchen, with a cigarette burning and a glass of wine in his hand.

From the stories folder that accompanies The Quilt to displays

A beacon of hope was dimmed last week when Tom O’Donoghue died at his home in Wellington of AIDS, the disease he devoted the last few years of his life to preventing.

Diagnosed HIV positive in 1988, Tom was one of the first New Zealanders to stand up and say so, combining his personal experience and his background as a health worker to take the prevention message to the community.

A gifted communicator, he was equally at home whether pushing his theme to at-risk homosexual men, sex workers and injecting drug users, or to politicians and bureaucrats.

“If I can prevent just one person from getting this disease then it will have been worthwhile” was his driving principle, a motivation which saw him carry on even when it was clear his own illness was taking its toll.

His funeral, held at a packed Old St Paul’s last Saturday, was clear testimony to the number and diversity of people he had reached out and touched.

Speaker after speaker paid tribute to Tom’s contribution to their own understanding and acceptance of the virus, speaking of him as teacher, friend, support and a light in their darkest hour.

Many in Wellington knew him from work at the upper Cuba St premises he shared with the Prostitutes Collective and the Wellington Information and Drug Education group. It was a base he chose, he said, because he did not feel rejected or marginalised there.

He also worked in prisons, lectured to police recruits, conducted radio talkbacks, spoke to health professionals, community groups, schools and through the media.

Tenacious in his beliefs and untiring in his efforts, he was also a warm and humourous man who leavened the solemnity of his message with charm and wit.

He was a persistent political lobbyist, enormously pleased when Human Rights legislation was broadened last year to outlaw discrimination on the grounds of sexual orientation or health status.

Tom co-founded the National People Living with AIDS Union, was a member of the government’s advisory National Council on AIDS, and a trustee of the NZ AIDS Foundation (now Burnett Foundation Aotearoa).

Despite his worsening illness he refused to become self-absorbed and retained till the end his interest in and compassion for others. He will be missed by many.

Tom is survived by Kim, his partner of 10 years.

“Tom’s contribution to community understanding of AIDS is incomparable. We have lost a unique and inspirational figure – a man who was loved and respected by everyone who worked with him,” says Warren Lindberg, Director of the New Zealand AIDS Foundation (now Burnett Foundation Aotearoa).

Tom was one of the first people in New Zealand to publicly acknowledge his HIV status and a powerful advocate for people living with HIV and living with AIDS.

Tom was a founder member of the National People Living With AIDS Union and Collective Thinking, a publication for people living with, or affected by, HIV/AIDS. He was a trustee of the New Zealand AIDS Foundation until 1991 and had many links with other community organisations throughout New Zealand, including new Zealand Prostitutes Collective and organisations working with injecting drug users.

Tom was a popular and powerful educator in the wider community too, through his work in prisons, in the north where his family live, with the media and at public events like last May’s Wellington Beacons of Hope ceremony.

Then, Tom spoke of “the enormous relief” he felt when he first publicly acknowledged he was HIV positive and the need for people to speak out about HIV and its effects, particularly within our gay community.

“Let us no longer be burdened by dishonesty.” he said. “Let us be the best educators in the field of HIV/AIDS because only we can personalise this virus. The prejudice and stigma still exist because of the nature of HIV being a sexually transmitted disease. But disclosure can lead to enormous personalised reward, and the benefits to the community of increasing our visibility and stopping the spread of this virus are huge.

Warren Lindberg: “Everyone in the New Zealand AIDS Foundation mourns his loss. We extend our heartfelt sympathies to those who knew Tom, particularly his partner Ken. Tom’s courage when faced with AID, and his immense contribution to creating a more supportive environment for those living with HIV/AIDS and those at risk, is nothing short of inspirational.”

The Prostitutes Collective and the Injecting Drug community in Wellington published this in their joint periodical:

Tom O’Donoghue, 3/6/54 – 28/9/94Tom died peacefully at his home in Wellington after long illness with AIDS. Our thoughts go out to Kim, his partner of 10 years.

Tom was a crusader for the rights of people living with HIV and AIDS, injecting drug users and sex workers.

In the five years he spent with us, he taught us many things. He was one of the few people who was able to put a face to AIDS. He accessed all kinds of people at all levels. His opening line would be, “Hi, I’m Tom, and I’ve got AIDS.” Incredibly the doors would open.

He provided advice for Government Ministers (developing a special rapport with the Hon. Katherine O’Regan). Government departments were often visited by Tom. The Lifestyle Changes Programme for prison inmates and Officers was started by Tom and he worked closely with Justice employees.

He also taught us all in the way he lived and his interaction with all sorts of different people. Tommy showed us that living with the HIV virus was just that . . . living. He dispelled any misconceptions/myths that people might have had about the virus and those living with HIV/AIDS.

Besides Tom the Campaigner, we will always remember the cheeky/naught Tommy and his personal insights with everyone he met. Hi little giggles and the way his eyes would twinkle when he would say, “I hope you don’t mind but . . . ”

Because of who Tom was and what he meant to us, Tom will remain a part of us for a very long time.

Nearly twenty years since you left. Still remember you with love and miss you.