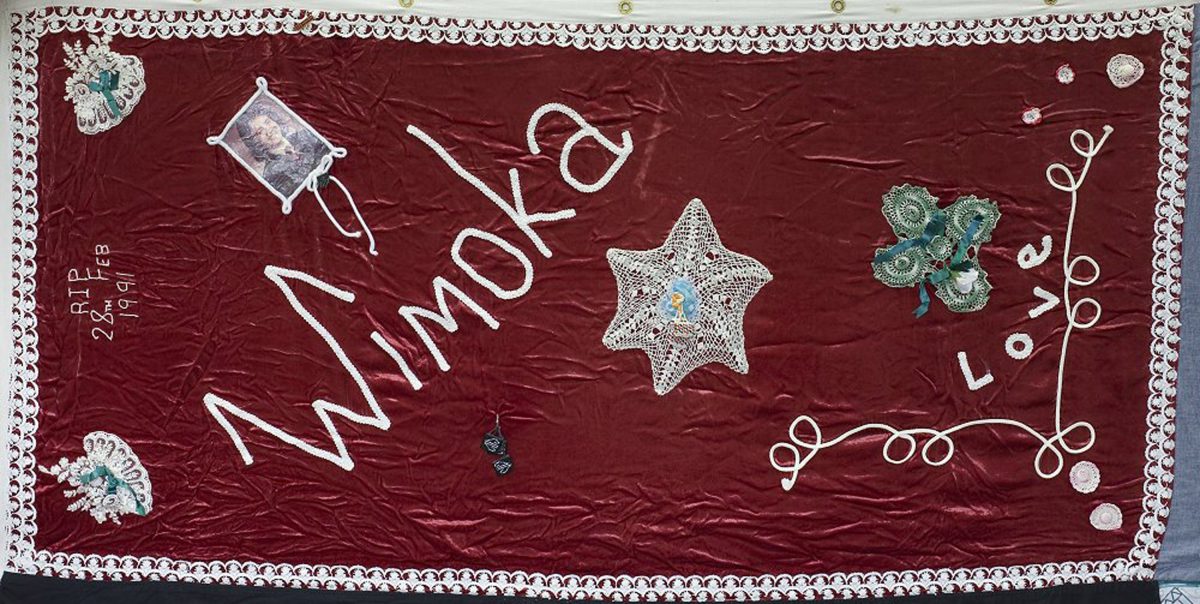 “Our Most Treasured Memories”

Wimoka as my eldest child of seven children. He grew up on a farm north of Auckland under the love and guidance of his grandmother, whom he loved dearly.

His love of the arts was obvious as a child but came to full bloom in his adult years. Wimoka has a beautiful voice and used it often to express his love of people. To hear him sing was magic! His expressions towards the end were music, “Unchained Melody”, “When a Boy Falls in Love”.

Wimoka qualified as a machinist with guidance from an aunt. He also designed men’s, women’s and children’s gear, as well as exclusive designs for family and friends for which he won awards. Wimoka’s other interests were leather, bone and wood carving, logos, and dot and freehand drawing.

Wimoka loved his whanau and never forgot special occasions, especially at Christmas and for birthdays. He always sent cards.

Though his life was shortened by AIDS he lived a very full life. He shared his hurts and regrets with me and our whanau and for that, we will always be eternally grateful.

May Wimoka’s memory help other whanau at their time of great need. May God’s love and guidance give them strength.

We, the whanau of Wimoka, give the NZ Quilt Project permission to use our memories of Wimoka as a token of our love to other whanau.

With loving thoughts to all,
Alma Smith (Wimoka’s mother)

From the book “Unfolding: The Story of the Australian and New Zealand AIDS Quilt Projects“

I’ve been nursing all my life. I have six other children besides Wimoka. Three girls and three other boys. I suppose I enjoy life and try not to worry too much about what’s been, and hopefully what’s to come will make a lot more sense.

Wimoka had many talents. He qualified in dressmaking and was a beautiful artist. He loved his brothers and sisters and he cared about life. As a son and a brother, he was loved very dearly. His grandmother thought the world of him, and he carried the name of my father, who I never knew. My husband was his step-dad and you would never have known that he wasn’t his real dad. He had great respect for him. My youngest daughter was only eleven when he died.

My mum and sisters and I found out about the Quilt through a coordinator in the Kaitaia region. We sat down one afternoon and decided how we were going to make this quilt. Myself and my mum and Huia my older sister. Wimoka’s quilt is made up of a whole lot of love and the depth and the intensity of the quilt is from our hearts.

The white rose signifies the love that his cousins all had for him. It’s from his oldest cousin in the girls, Lee. The chain is the trail of love that comes from the rest of the cousins, and the word ‘love’ was from all of them, his brothers and sisters, his cousins.

Wimoka’s grandmother was an ardent crocheter and he always loved her work. Those little hats are just ‘I love you’ from Nana. He’s also got what you call the baskets of knowledge. The baskets of Knowledge being the knowledge that he imparted during his lifetime. The knowledge of heart and hope and life and death. He has, on his panel, a lifetime membership of the Maori Women’s Welfare League. My mother is one of the few remaining life members of that association. She was one of the founding members in 1943 of the Taitokerau District. She was presented that badge in 1953 and, in her love for Wimoka, she imparted it to his panel.

Another brooch on his panel is from the Catholic Mercy Hospital and this comes from me. The other basket of knowledge belongs to his grandmother. They signify life in the true sense. From a Maori point of view, the basket of knowledge is my mother being able to impart a whole lot of things that made up my life, that made up Wimoka’s life. They contain the understanding to, hopefully, educate people.

The red velvet material the panel is made up of, Mum bought many years ago. It was a piece that Wimoka always wanted. She felt it was an appropriate remembrance for him. The guipure lace that surrounds the panel was used years ago on bridal gowns and was also a piece that Wimoka admired. I did the date that he passed away . . . sat down all afternoon trying to make it as nice as possible. He was always a very conscientious person in that respect. “If you don’t do it properly, it wasn’t worth doing.” I think we probably all inherited that.

Even as I am sitting here nearly three years down the line it’s as if it was just yesterday that all this took place.

The past ten years, prior to Wimoka’s death, I’ve been involved in the care of terminally ill patients at the St. Joseph’s unit at the Mercy Hospital. Wimoka actually passed away in the unit and all the people that looked after him were all very dear friends of mine. So it became like my own extended family.

The Taitokerau block that Wimoka is on is made up of many people that I have got to know. Wimoka’s great-great-grandfather actually sold the land to Ian’s (the panel next to Wimoka) grandparents, when they first settled in the northern district. Wimoka’s panel is the Maori side of the Kaitaia district and Ian’s is the Pakeha side. I still miss Wimoka very, very much today. We shared many, many lovely thoughts and there was a song that he always sang to me that was called ‘When a Boy Falls In Love‘. Wimoka had a beautiful voice. He could sing any song. His grandmother often says today that he wasn’t meant for this world.

I remember him saying to me once, ‘My greatest wish would be to give you a grandchild. Which I can’t do.’ I said to him that even if he couldn’t give me what obviously hurt his heart so very deeply, I was happy that he was such a loving son.

The day that Wimoka and I actually got the confirmation that he was dying of AIDS and that it could only be a matter of weeks, he looked at me and said, ‘Mum, I don’t want to die. Why was I so stupid?’ I said, ‘No, it wasn’t stupidity that brought you down this road, it was lack of education.’

Wimoka left behind some nieces and nephews, and I know that, in his heart, if they have a safer world to live in, then his death would never have been in vain.

When the panel was made up in Whangarei, Nicki Eddy [National Convenor of The Quilt Project at the time] was designated to take it to the South Island, to the Dunedin unfolding. Three of us decided that we would like to go too. We left Auckland early one morning and travelled all night to Dunedin. There was a big snowstorm down in the South Island at that time and planes couldn’t take off and people couldn’t use the roads. We caught the ferry in Wellington and went across. The snow was blocking the roads behind us. Prior to getting to Dunedin, they had closed the road and we had to detour. It was as if everything had waited for us. By all calculations, we should not have even made it to the South Island.

But we got to Dunedin and were privileged to be there and hand it over to the people of Dunedin with the full blessing of the Mayor of Dunedin and many other respected citizens of the community. It was a real thrill to say that our Taitokerau block had been right from the North, at Cape Reinga, all the way to the south where it was handed over with the dignity with which it left our area.

To me, the Quilt Project is a very important part of our whole grieving. I still feel a deep sense of loss for Wimoka, but I know that what his panel is doing is educating. So, hopefully, my loss is someone else’s gain. The Project and what it represents has helped me to heal. I know that Wimoka’s panel is only a small token of what he really was in life, but if it helps anybody in bringing their awareness to the fore, then it will be a blessing.

This is Maori aroha, the love that we felt for the ones that are on his quilt.

Alma’s mother, Maude Smith, who assisted her in the making of Wimoka’s panel, passed away on 15 January 1994. She is resting between Wimoka her husband, and Wimoka her beloved grandson.

Wimoka’s mother has also provided us with this undated photo of Wimoka.