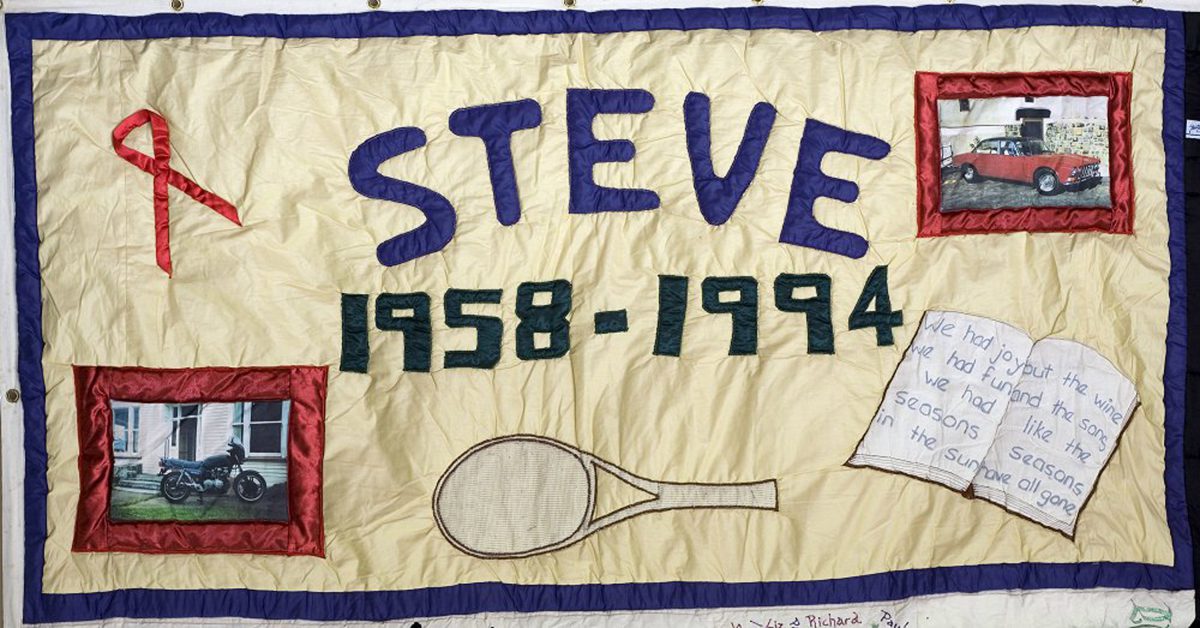 This Quilt was made in memory of my husband, Stephen, who died from an AIDS-related condition on 2nd November 1994.

Stephen was diagnosed three years earlier as being HIV positive. He had contracted this through intravenous drug use prior to his return to New Zealand.

Because of the stigma and shame associated with HIV, I agreed to keep this not only from his friends but also from our families. We both lived in fear of ever being found out and being shunned by society.

We continued as best we could for the next two years, but normal activities were becoming more difficult and tiring for Stephen to perform. His love of tennis was the first sacrifice. He was regarded as one of the best players at our club, where we met.

As the months progressed Stephen’s weight plummeted and he was unable to eat, every activity caused him great fatigue and he slept more frequently. By now we had told both our families and it was apparent Stephen was ill. Stephen and I married six weeks before he lapsed into a coma and died three days later.

To try to depict a person’s life on a 6 x 3-foot piece of material is a daunting task. Stephen’s sense of humour, love of life, and compassion for others can never be shown, but hopefully it is a dynamic way to open the eyes, hearts and minds of those who believe this will never happen to them.

Stephen touched the lives of so many and we will all be indebted and grateful forever.

Click to view details
Back to Block 15
‹ Previous Panel 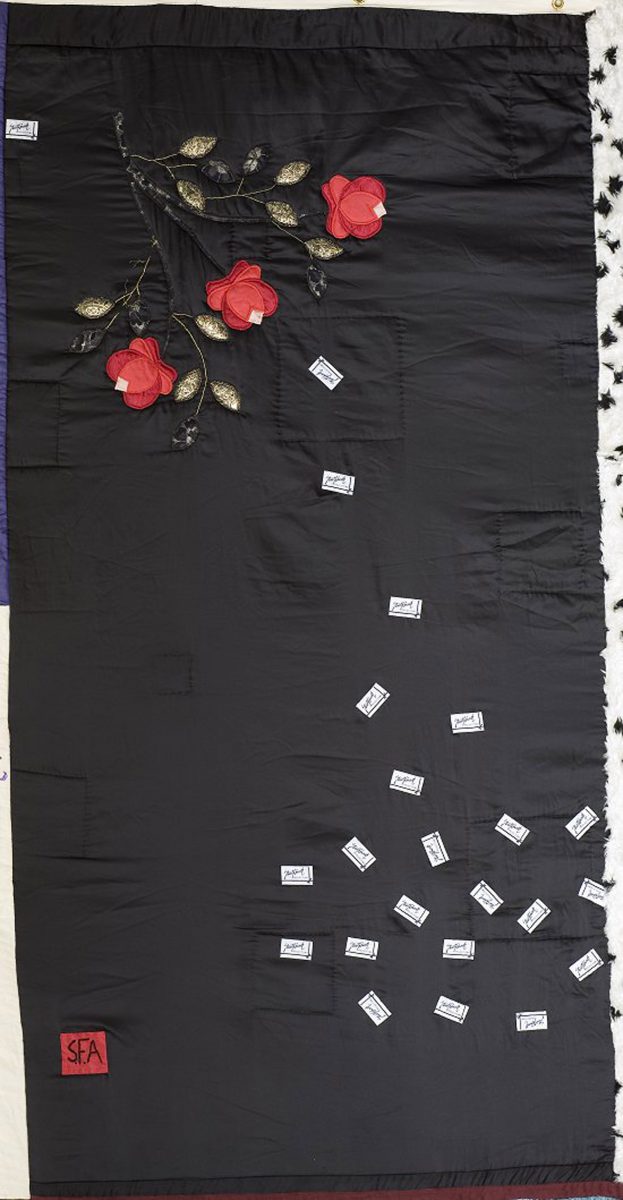 Carol-Anne, who helped with some of the embroideries on Stewart’s panel, wrote:

Stuart was a great friend of mine & my partner Terry.We all had many great times together & I truly miss him still.

I knew Stuart in Paris in 1983 and I’ll remember him forever as the most amazing man I’ve ever met in my life.I’m sure he’s still incredible in heaven! 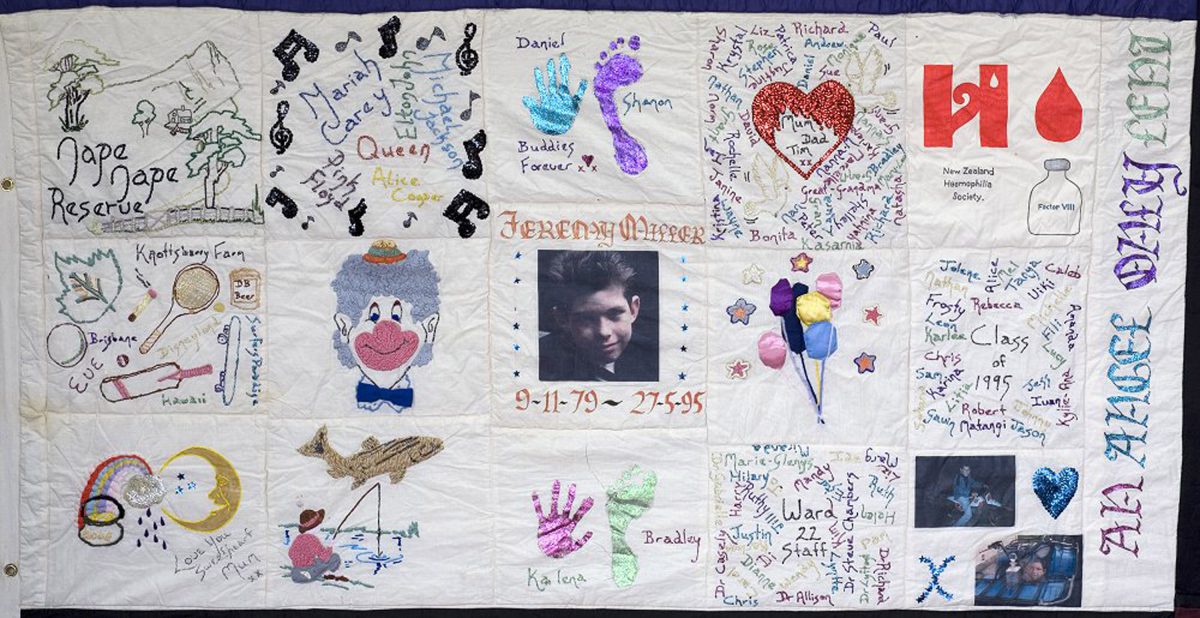 Music
Jeremy had a great variety of music. He liked it soft and gentle or with a beat and sometimes loud!

Hand and footprints
The hand and foot prints are of Jeremy’s close cousins, especially wee Daniel whom Jeremy named. Jeremy and Daniel are buddies forever.

Family
Jeremy will always be our brave wee soldier that battled and fought with courage and the heart of an army.

Timothy’s panel
Tim’s panel represents Jeremy’s love of sports, the occasional beer and smoke, and the places that we were able to visit as a family.

Clown
I discovered this picture after Jeremy’s death. It was dated 21/02/95. It was to be his last picture coloured. It was copied in its original colours that Jeremy used. The bow tie was Timothy’s.

Main photo
This photo was taken in1990 when Jeremy and Eve launched the Kiwi Kids With AIDS Trust at Auckland Zoo.

Balloons
These were requested by Jeremy for his funeral. He loved them. On his birthday and anniversary the family write on and release the balloons for him to catch.

Class of ’95
Jeremy’s class mates were both loving and supportive, and a very special part of his life.

Rainbow
The rainbow is the story I created for Jeremy so he wouldn’t be frightened dying. The rainbow was for the angels to visit us. The moon, to watch over us and the angels. The purple rain in heaven, a safe place that one day we will join him.

Fishing
When and where possible, Jeremy loved fishing. it could be on the Avon, Lyttleton wharf, or Nape Nape. Even if it rained.

Ward staff
The ward staff are special people that made the hospital bearable. Some will always be considered friends. The bond they shared with Jeremy is a special gift.

Photos
The photos are Jemm’s love of motorbikes, especially his four wheeler, which we all have many special memories of the times shared with it.

Jeremy was a special gift to us all with a strong will and a determination, crazy sense of humour filled with laughter. He never complained even when in intense pain. We love and miss him dearly more than words can say.

Click to view details
Back to Block 15
‹ Previous Panel

Sadly, at the time of setting up this website, we have no information about this panel. 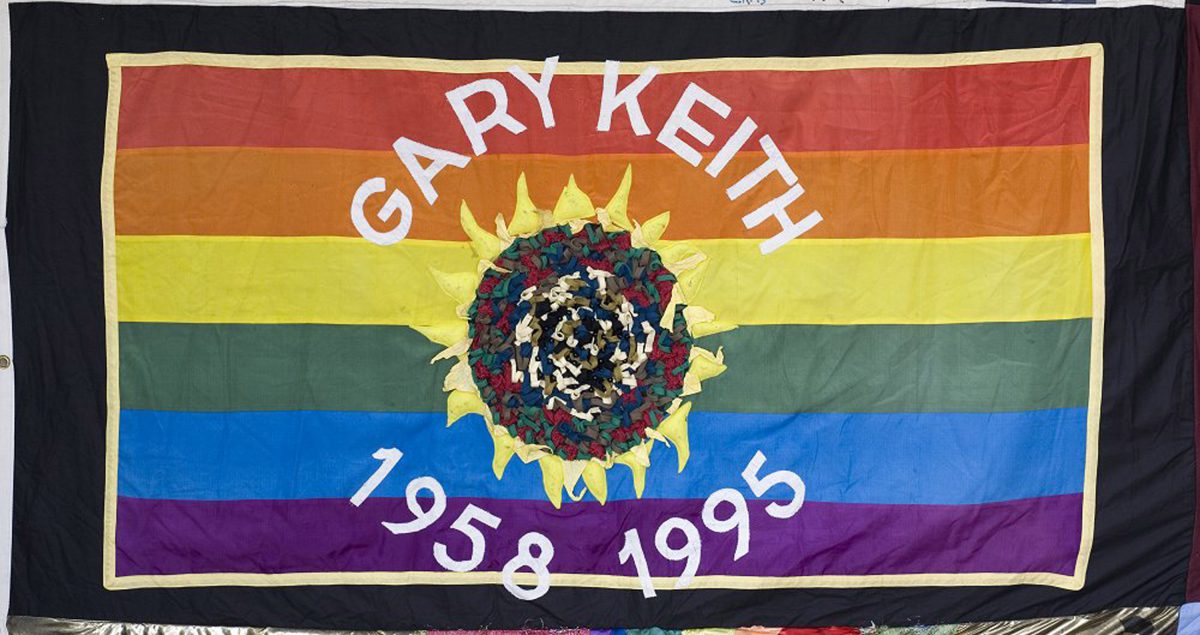 Sadly, at the time of setting up this website, we have no information about this panel. 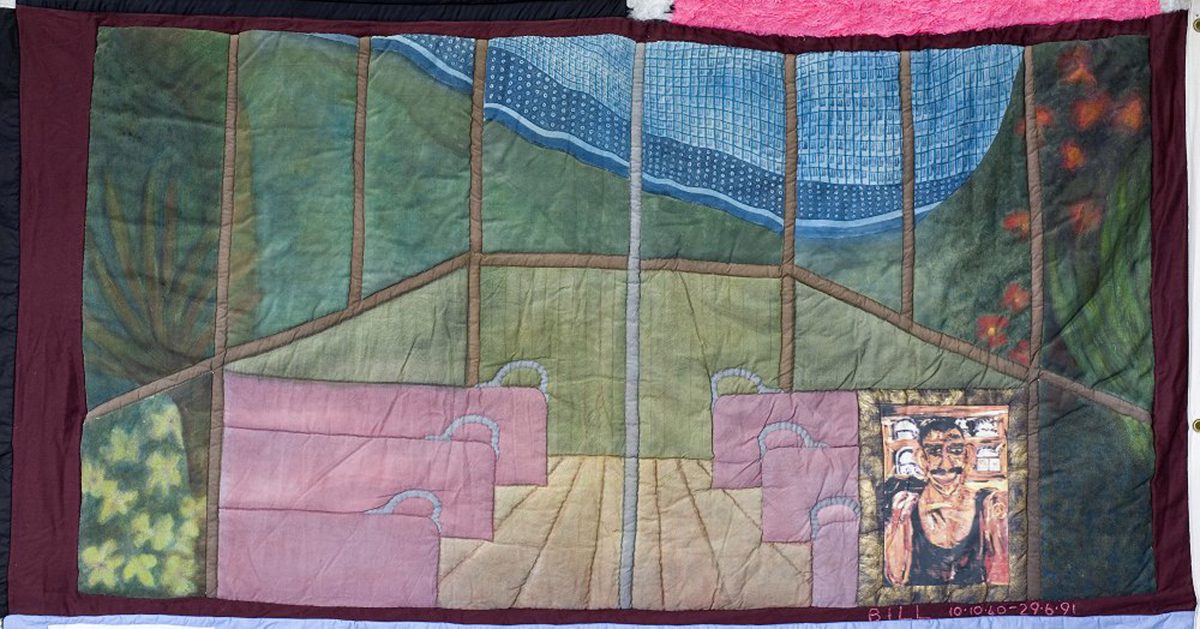 Born in Lower Hutt, New Zealand, at the beginning of World War II, Bill had a happy, active childhood, went to Eastern Hutt School, was a foundation pupil of Hutt Valley Intermediate School, and finally gained University Entrance at Hutt Valley High School. In his final year, Bill was chosen as a Sea Cadet to attend a World Jamboree in the United Kingdom, and this generated an early love of travel.

Bill loved designing houses, and wished to be n architect, but Father persuaded him to attend Lincoln Agricultural College, where he gained a B.Agr.Sci. and came to work in Wellington as a farm adviser. He was soon off to the United Kingdom on an exchange system, and while there, was chosen to do a Masters in Farm Economics at Nottingham University. However, after much agonising, he threw this in to become a gardener.

After some time in the United Kingdom, and the United States of America, he moved to Australia to work in the Melbourne and Sydney Botanical Gardens. After some years in the rare plant section he again looked to another outdoor job with people contact, and became “postie” for Potts Point, Sydney. He enjoyed this occupation, and always passed up chances of promotion, and continued on until declining health forced an early retirement.

He spent his last months in Brisbane where I was able to spend three weeks with him, remarkably strong in spirit and philosophical always to the end.

I remember Bill at once for his quality of making one feel good about oneself. He had a strong sense of justice, and enjoyed many a long discussion about the problems of the world, and his theories on the solutions. He loved family celebrations – birthdays, weddings, picnics, concerts – which would always finish with a round the table yarn about good times.

We remember Bill today with this panel, bethink of him all the time, as one who did so much in his fifty years and gave us love and kindness, his sense of justice, and above all his marvellous sense of humour which shone through to the end. 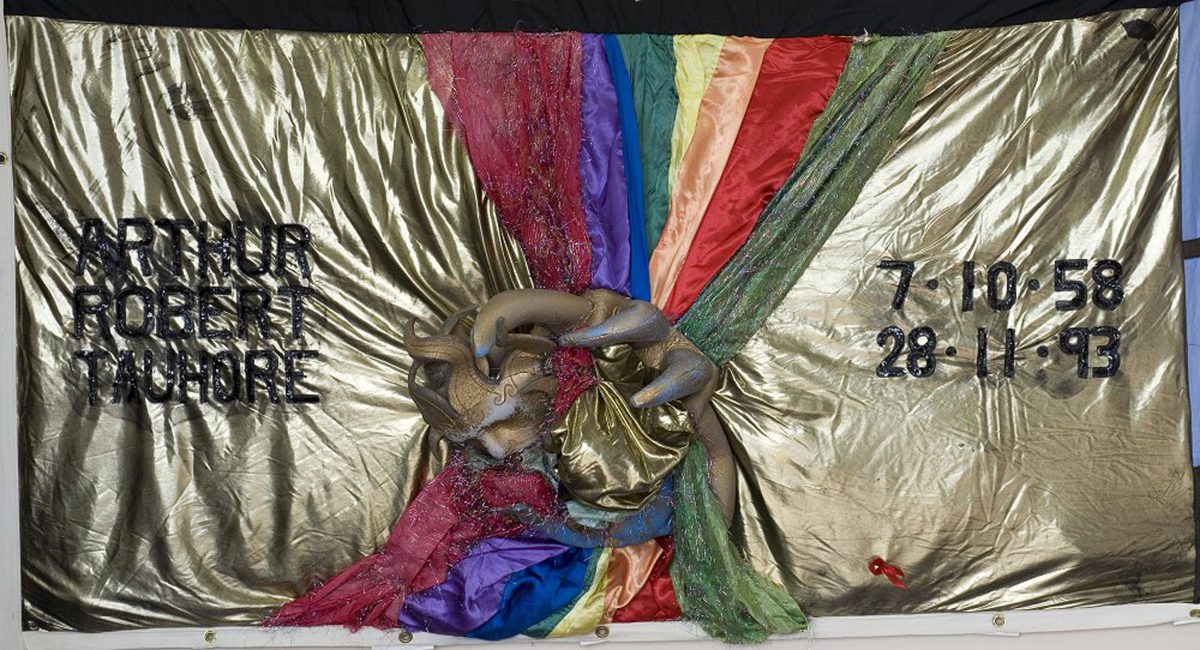 We have the following excerpts from an obituary written for Arthur by Anne Hogan:

To hundreds of people he was known simply as Arthur – a flamboyant, beautiful boy who made his mark on the Wellington scene for more than 15 years as a hairdresser, drag artist, singer, committed party animal and lover of life.

HIV positive for 10 years, Arthur succumbed to AIDS at home…on Sunday, November 28. He was 35. As usual, his timing was impeccable. It was the night of the gay dance party Devotion. His funeral was held on December 1st – World AIDS Day.

… Although he was ill off and on for a year, Arthur did manage to perform at last year’s Devotion party with his usual panache.

His early life was not so much fun but still full of drama.

His father, a Ngati Porou, brought up the five children at Titahi Bay after their mother left. At eight, Arthur was made a ward of the State and spent time in and out of several boys’ homes. At 16, he was expelled from Mana College for dealing drugs. The same year he entered into his first homosexual relationship. He mixed with Black Power, frequented the infamous Bistro Bar and injected heroin, a habit he gave up after the price went up and a boyfriend died from an overdose.

Fifteen years ago, Arthur took up hairdressing, an occupation of which he said: “I love it. For one thing, you have clean nails at the end of the day.”

He sang in bands including Urban Dwellers and Trash and, with three friends, toured the country in a drag show called Bertha and the Transisters.

A friend, Andre, summed up his life in the death notices with the following eulogy: “With a laugh as wicked and wild as the stories you told. Never be afraid to be yourself. Your spirit and soul will always be here.” 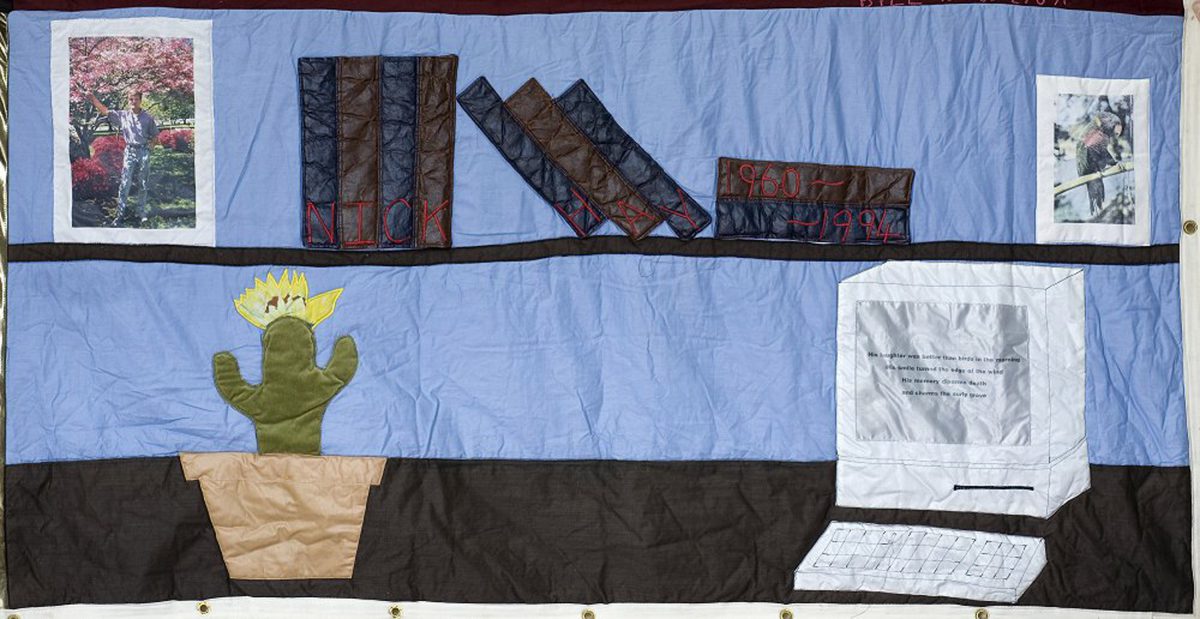 Nick was a valued colleague at Canterbury Public Library for almost nine years and a greatly loved friend for sixteen.

He was enthusiastic, efficient, very capable and totally dependable at work, with nothing being too much trouble. As a friend he was a cheerful and warm person, generous with himself, and such great fun to be with.

The panel shows some of his interests in life:
a bookshelf with books – representing his time as a librarian
a VDU – desktop publishing
cacti
cage birds

‹ Previous Panel
Back to Block 15

Block image is made up of images of the individual panels placed in their correct position on the block, so seams, edges etc. may not line up correctly.

Other photos of this block 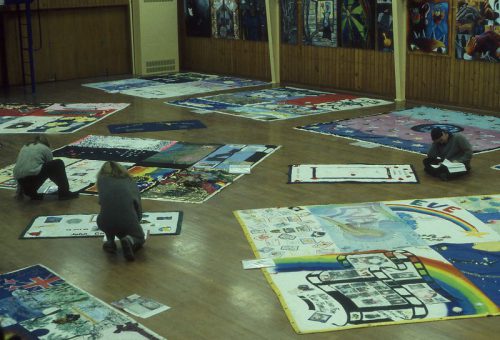 Panels in this Block

Make your own panel

Get in touch with us to add memories to an existing panel.

Get in touch to enquire.